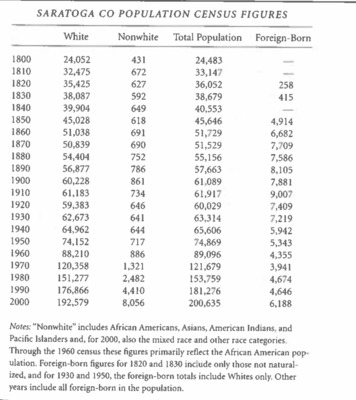 Since 1790, when the US government first conducted a census, to 2020, Saratoga has grown to be home from around 17,000 to almost 230,00 people living in 20 communities, from densely-populated Saratoga Springs to spread out Hadley and Day.

This page from the entry from "Saratoga County" in the New York State Encyclopedia (2005) shows change over time, from 1800 to 2000, of the number of inhabitants, ethnicity, and place of birth.  The information here is synthesized, combined from  answers to several questions. Censuses generally collect much more information about people's place of birth, education, employment, religion, and even information about the community they lived in. 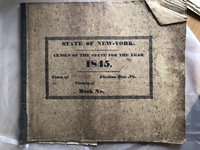 Census materials are both richly detailed and informative, as well as silent on many topics and subjective or incomplete on others.  Questions change over time -- in the 1845 New York Census, for example, the only names recordered were (mostly adult male) heads of household.  As Dr. Joe Bruchac notes in an interview, official censuses sometimes did not identify Native American community members. Further, some people hid or changed their ethnicity to avoid potential discrimination.  So use them thoughtfully, and with other kinds of evidence, to explore the past and understand the present.