From Flu to COVID

Contagious diseases challenge the community whenever they occur.  Saratoga County has experienced several major outbreaks since its establishment in 1791, including of cholera, smallpox and influenza, and (most recently) the COVID-19 pandemic.  The medical challenges of treating a public health crisis were often increased by the spread of misinformation either because of fear, or for personal, political, or economic gain.

When in the 1870s, a Saratoga Springs doctor misdiagnosed or lied about a smallpox death, which contributed to an outbreak in the community, the outcry led to the establishment of a health department in Saratoga Springs. Fear that news of a smallpox outbreak would devastate a tourism-focused economy, prompted an 1872 article that, in the words of Brookside Museum educator and historian Anne Clothier, “actually goes through and lists the cause of death for about a dozen people;  everything from pneumonia, childbed fever, a fall from a roof, and it ends by arguing that, “these are the causes of death in the past month or two, as you can see they’re completely normal and no one has died of XYZ disease, so, any reports you’ve heard about this disease raging in Saratoga Springs are completely false.” And it’s interesting because they’re trying to save their reputation as this tourism-focused community, but they had also created this public statement that they had wanted to go to an early version of Associated Press, trying to get that word out that “it’s okay to come here. Come on, spend your money here” (Anne Clothier interview). 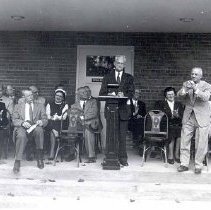 One of the most moving stories discovered at Brookside while working on this exhibit about 1918, was the story of Dr. Ralph Post and his first wife, Francis Gray Post. He was a physician originally from the Catskill area and trained in Albany. Francis was a nurse who was working at Albany and when they got married around 1915, and they ended up moving to Ballston Spa and setting up practice there. When the war began, Ralph was sent overseas as a physician with the military and Francis ended up taking a position out in western New York in a supervisory position at a hospital. It was after only a few weeks when she became ill, and she ended up passing away in October of 1918 from influenza, and Ralph was in the European theater during World War I acting as a physician at the time. According to Anne Clothier, there is a letter excerpt from someone who had known him when he lived in Ballston Spa and knew Francis. In a letter, she mentions having run into him and really expressing sympathy for the loss of his wife and never being able to say goodbye, not being even in the same country when she passed away, and so that was one of the really striking stories, again, a very personal story of that World War I, 1918 influenza epidemic (Anne Clothier interview). Connections can be made between the experience of Dr. Post not being able to be with his wife when she died (could use the correspondence between Dr. Post and Francis at the Brookside Museum) and the experiences of people today who were unable to attend to their loved ones when they died of COVID-19.

The Spanish Flu, which occurred from 1918 to 1920, is also an important and well-known example of how medicine evolved in Saratoga County and how the county responded to a dangerous contagious disease. Apparently, the members of the state department’s Public Health Council treated the virus extremely seriously, so seriously, in fact, that the council enacted a rule that made coughing or sneezing in public, without covering the mouth or nose, a misdemeanor offense. The punishment for this misdemeanor offense was a $500 fine, a year in prison or both (Wilkin Tales from 1918: The battle against the influenza pandemic in Schenectady). During this time, some businesses pitched their products as remedies as medical botany became popular without any modern medicine available to treat the Spanish Flu. One such remedy was Flaxolyn which was advertised nationally as a natural cure made from roots, herbs, and pulverized fruits (Wilkin Tales from 1918: The battle against the influenza pandemic in Schenectady). From 2018 to 2019, the Brookside Museum hosted a Spanish Influenza exhibit and probably has many of the original materials which were used. Also, the Times Union ran retrospectives on the epidemic in 2018, 1998, and 1999. It would be interesting to compare the medical treatments for the Spanish Flu and Covid-19, while also noting that as late as 2018, doctors were pessimistic about the chances of another deadly pandemic emerging again. Since so many doctors and scientists were interviewed for the one hundred anniversary of the Spanish Flu epidemic, it might be interesting to compare what they said to their current views on the Covid-19 pandemic.

Commemoration of the Spanish Flu

The 1918 influenza epidemic was commemorated in Albany’s The Times Union newspaper in 1998, 1999 and 2018, and in 2018, the Brookside Museum commemorated the centennial with a yearlong exhibit. Even then, however, doctors warned a complacent public about the inevitablility of another deadly pandemic emerging. As international flu expert Dr. Robert Webster told reporter Bethany Bump, “The question I get asked most frequently is whether it’s possible for a 1918 virus to emerge in the world today. It is not only possible, it is just a matter of when” (Bump 2018).

During what the Daily Gazette calls the Flu Frenzy of 1957, there was a virus outbreak, which scientists referred to as the “Asian” flu, which eventually caused between 1 million and 2 million deaths across the world. By late September of 1957, the New York State Health Department had confirmed 350 cases of “Asian” flu in New York and Dr. Ralph Isabella, president of the Schenectady County Medical Society, urged the public to “‘not get panicky and rush into a program of mass inoculation for its employees until essential priority groups in the community have been inoculated’” (Wilkin Reporter's article about 1918 pandemic on his Top 5 list of 2020 stories). This priority group included doctors, nurses, hospital personnel, caregivers, police officers, firefighters, communications workers and transportation personnel. The front page of October 22nd 1957 publication of the Schenectady Gazette reported that doctors urged those with the flu to stay at home so as to not overcrowd the hospitals, as well as how the epidemic prevented the reopening of two local schools (Wilkin “Reporter's Article about 1918 Pandemic on His Top 5 List of 2020 Stories”). Furthermore, the cancelation of school and high school football games to prevent the spread of the illness, is much like what we have experienced during the COVID-19 pandemic. 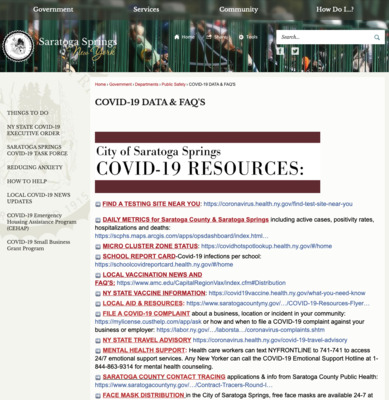 Covid-19 was first reported in Wuhan, China in December of 2019. Since then, the deadly virus has caused a worldwide pandemic, 138 million cases internationally and 31.5 million cases reported in the U.S. Like the Spanish Flu, which killed 675,000 people in the U.S., Covid-19 has killed at least 570,000 people, making it the second deadliest pandemic to reach America (COVID Data Tracker). However, thanks to advances in technology and medicine, the U.S. has responded to this pandemic far better than it did one hundred years ago. For example, vaccines were quickly developed and over 200 million vaccinations were given within 100 days of President Biden’s inauguration (Naylor).

In Saratoga Springs, the local government set up a website that gives detailed information on resources related to the virus, including testing and vaccination news, helpful websites, a number of hospitalizations and deaths in the county, health and quarantining advice, business closings and openings, and travel information (“City of Saratoga Springs COVID-19 Resources”). The site includes a calendar on the initiatives that will be taken, as well as milestones to be reached to have the community fully reopen as soon as possible, and would be a good resource for comparing the two pandemics.

During the Covid-19 pandemic, it became clear that medicine had advanced in terms of medicines and technologies. For example, mechanical ventialtors were not used during the 1918 pandemic because the first reliable respirator was the Iron Lung, which wasn't invented until 1928. The types of mechanical ventilators used for treating Covid patients in the U.S. is far more sophisticated than the Iron Lung. But during the pandemic, some doctors became interested in creating a modern version of the Iron Lung because it would be cheaper to make (De La Garza). 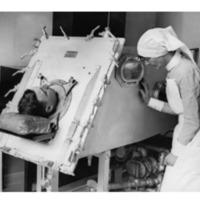 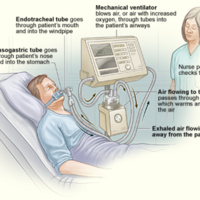 Then and Now:  Helping patients breathe has been a high priority in the early 20th and early 21st centuries.

One strategy to keep the virus from spreading both during both pandemics is the wearing of face masks. Government officials and agencies throughout the U.S. conducted widespread campaigns to make sure the public understood how important is is to "Mask Up!" 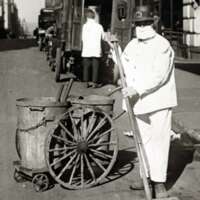 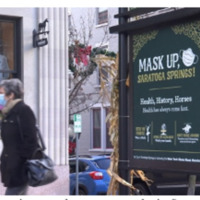 Then and Now: The original caption on this Oct. 21, 1918, photo read: "Mask worn to check influenza spread. The admonition of the New York Health Board to wear masks to check the spread of influenza epidemic has been headed. 'Better ridiculous than dead' is the view of one official."

It might be interesting to cover compare and contrast case studies. An early publicized instance of someone falling ill to the virus was 40-year-old Paul “Tucker” Jancsy, a major in the New York Air National Guard and a Delta Air Lines Pilot. Returning to his Saratoga home in March 2020 after a Delta shift, he fell ill and was rushed to Saratoga Hospital with severe Covid-19 symptoms. He was intubated and isolated and was not expected to live. Meanwhile, he had infected his father, who ended up in the hospital at the same time. One month later, he was able to leave the hospital. However, Covid-19 has many complications that doctors did not fully understand, so Jancsy returned to the hospital for emergency surgery (Levith). This case could show how far medicine has come, but that a new virus always has unknowns that doctors and scientists have to figure out.

Another interesting case might be of an unidentified 67-year-old jeweler in Saratoga Springs who was the first person in New York to test positive for the U.K. variant of Covid known as B.1.1.7 (Fires, Liberatore, Lyons). According to the article, the jeweler is thought to have contracted the virus not through going out of the country, but through community spread (Ibid.). Many officials believe that this new variant is even more transmissible than the original strain, which will lead to a rise in cases.