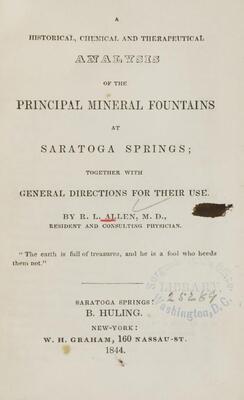 "A Historical, Chemical, and Therapeutical Analysis of the Principle Mineral Waters of Saratoga Springs" by Dr. R.L Allen.

The practice of medicine in the 13 colonies was fairly rudimentary in the 1700s, primarily because very few formally trained physicians emigrated from Britain. The term ‘saw bones’ to describe early doctors was a literal term. Saratoga County nonetheless drew physicians (in part to serve visitors to the mineral springs) and established the Saratoga  County Medical Society at the courthouse in Ballston Spa in July 1806 (“Our County and Its People”, 445-441).  Medical doctors in the early 1800s included Dr. R.L. Allen who practices in Saratoga Springs during the first half of the century and even published a  book in 1844 called “A Historical, Chemical, and Therapeutical Analysis of the Principle Mineral Waters of Saratoga. Springs”, and Samuel Davis MD (1765-1840) who came to Ballston Spa in 1790 and is thought to be the first physician to practice medicine in that town (“Our County and Its People”, 445-445). 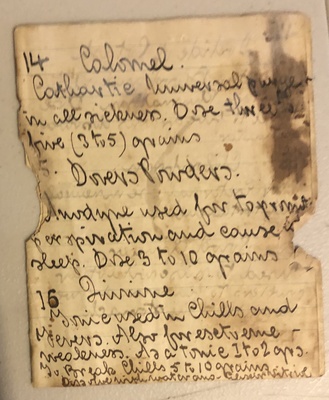 Without formal training but passing down knowledge for generations, women, including midwives, often administered healthcare, including herbal and folk remedies as seen here. Most of the sick were treated at home, with homemade medicines and with folk remedies. Midwives and family members were especially important when it came to childbirth, which often happened at home. With little understanding of sanitation, mortality was extremely high, especially for infants and young children. 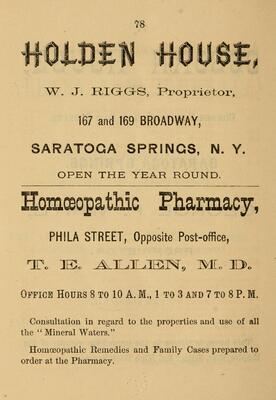 An ad for homeopathic treatment from Dearborn's 1872 guide to Saratoga Springs.

Until the mid-19th century, there was virtually no government regulation or attention paid to public health. The Civil War brought a wave of progress in medical knowledge and practice.  Dr. Samuel Pearsall, a native of Wilton, practiced in Saratoga Springs before attending lectures at the Homeopathic Medical College of Philadelphia for 2 years. (1856-1858), after which be returned to practice medicine in Saratoga Springs. At the time  homeopathic was very new and had many prejudices against it as well as competition with more traditional herbal remedies. However, “[Dr. Pearsall’s] energy and knowledge of his profession soon removed these obstacles, and, gaining in public confidence, he built up in a few years. A very successful practice” (Sylvester,  209) and brought homeopathic medicine to those with means (Sylvester)

The Union built army hospitals in every state, and medical organizers achieved considerable progress thanks to a well-funded United States Army Medical Department and the United States Sanitary Commission. Many other new health-related agencies were also formed during this time, raising public consciousness about healthcare. Despite the fact that Theodore Roosevelt (1901-1909), believed health insurance was important  because “no country could be strong whose people were sick and poor”, he didn’t lead the charge for stronger healthcare in America. In fact, most of the initiatives in the early    1900s were led by non-governmental organizations (Griffin). 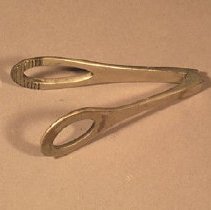 Forceps used during childbirth in the 19th century.

Lifelong Saratoga County resident Anne Clothier’s family history offers a telling of the kind of life or death situations that mothers and fathers experienced with limited medical infrastructure. Around 1915, Anne’s great-grandparents, Emma and Simeon, already had a daughter, Annie (Anne’s grandmother and namesake) when Emma became pregnant with their second child, a boy named George. At the end of the pregnancy, serious complications with the birth the doctor to their home in Malta to talk to Simeon and explain the choice he faced. Cesarian sections were possible, but risky, and used implements such as the forceps (Brookside object) from 1890, traumatizing and difficult,  Simeon learned that not both mother and child could survive. He was offered the choice between saving his son or saving his wife. He chose Emma. During “delivery George was  injured and only lived maybe an hour or so” (Anne Clothier interview). 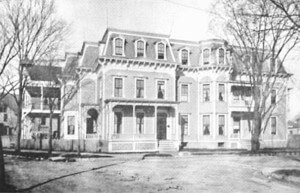 By the late nineteenth century, the state of women’s healthcare and maternal medicine  became driving force in the founding of organized medical centers, including Saratoga Hospital and many others, for Saratoga County. Despite its popularity as a “water cure” destination, Saratoga Springs lacked a hospital. Instead, injuries and other emergencies were treated in a room in police headquarters. Records indicate that the “police hospital” was used every few months in 1890 and 1891, and that at least one man died there. The women in the area did not want to rely on this “police hospital” for their healthcare especially when it came to obstetric and gynecological care. Many of these women, led by whom is currently unknown, began meeting to plan a more fitting replacement for the inadequate facility. On December 11, 1891, five signed the certificate of incorporation for Saratoga Emergency Hospital, the organization that over a century grew into Saratoga County’s leading healthcare provider. By 1895, Saratoga Emergency Hospital opened in a former house at the corner of West Harrison and Division streets. About 9 years later, in  1904, the Flower and Fruit Mission was established to support maternity services and provide other charitable assistance. The hospital was originally founded as Saratoga Emergency Hospital which operated out of a house on the corner of West Harrison and Division Street. In1913 the hospital expanded to a larger campus at 211 Church Street where it has been located ever since. Since then, the hospital has established  Saratoga Hospital Guild to foster better relations between the Hospital and the community, a Same-Day Surgery Center, the Whitney-Hendrickson Cardiac Catheterization Center, the Mollie Wilmot Radiation Oncology Center, the Alfred Z. Solomon Emergency Center, the Saratoga Community Health Center, the Saratoga Hospital Medical Group, and the Marylou Whitney and Desmond DelGiacco, MD, Intensive Care Unit (ICU), all named after philanthropists or charitable organizations. This is a massive expansion of the healthcare provided to Saratoga Springs compared to the “police hospital” that was in operation only 130 years ago. (“A Brief History: Saratoga Hospital”). Most of the county hospitals that exists today, still receive donations from charities and missions established when these hospitals were. The effects that women had on the formation healthcare system in Saratoga County are still being felt today.