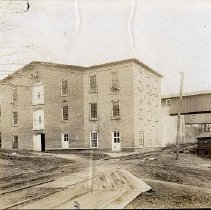 As Swedish pop group ABBA said in their 1976 smash hit “Money, Money, Money,” “it’s a rich man’s world.” Business and industry can establish and form a community; the economies and economic development of different communities in Saratoga County tells the stories of how they were founded and how they developed over the last few centuries. From early European settlers and lumber industries to the tourist industry in the 20th century, Saratoga has seen a lot of change and economic development. Its history of industry is a diverse one; this section will go into some of the major industries that have shaped the course of Saratoga’s history, through large companies like International Paper to smaller, independent businesses.

When Europeans began settling in Saratoga County, it was very much a story all about water. Water is what made the land attractive--specifically, it was three rivers: the Hudson, the Sacandaga, and the Kayaderosseras. Before railroads and other means of travel, access to rivers is what made an area economically viable. Water meant transport and power, which in turn meant the creation of various thriving industries all across Saratoga County. Cities in Saratoga that developed manufacturing economies were reliant on these rivers--cities like Corinth, Stillwater, and Mechanicville, to name a few (Starr).

Click here for a timeline of industry in Saratoga County. 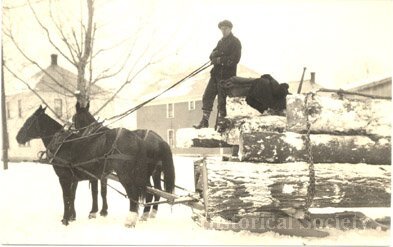 Starting before the Revolutionary War, logging established itself as the leading industry of the area. The aforementioned rivers were used to float millions of logs down from the Adirondacks. The tall pines of the area were especially attractive to the English who looked to use them as masts for the ships of their famous naval forces. An example of a community that established itself in a direct tie to the logging industry is Corinth, a city to the north of Saratoga County that lies on the Hudson River. Originally known as Jessup’s Landing, it was named after the brothers Ebenezer and Edward Jessup, who chose the location that would one day be known as Corinth to move their logs off the Hudson (Lourie). From there, they would then cart them around by wagon to the surrounding areas. As the two brothers were Royalists and eventually fled to Canada, the town was renamed in 1818. According to Corinth town historian Rachel Clothier, Corinth itself was named so because of a Bible that happened to be open to Corinthians. The legacy of logging across Saratoga County remained strong even after the fleeing of the Jessup brothers and the Revolutionary War (Dunn). It relied on two large natural resources of the area--the woods and the rivers. 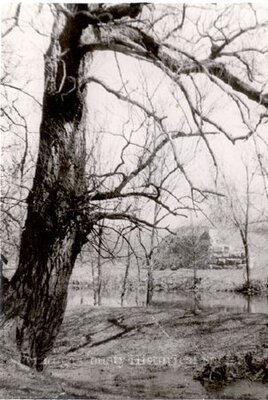 A tree alongside the Erie Canal in Saratoga County

Water trade and travel didn’t end with rivers, however. Both the Champlain and Erie Canals border Saratoga County. This brought robust trade routes to and from the Saratoga area. The Erie Canal didn’t extend very far into Saratoga County, but the Champlain Canal did, and therefore had slightly more importance to the development of county industry and economy. Finished in 1823, the construction of the Champlain Canal cost a fraction of the cost it took to build the Erie, and dramatically changed the towns of Schuylerville, Stillwater, Mechanicville, and Waterford. Industries could be created in such areas where there was now so much potential for robust trade, and it was this water based industry that dominated Saratoga County until the introduction of the railroad. For example, in Schuylerville, potatoes grown by local farms would be stored until the fall, when they would then be shipped via the canal to where there was demand. 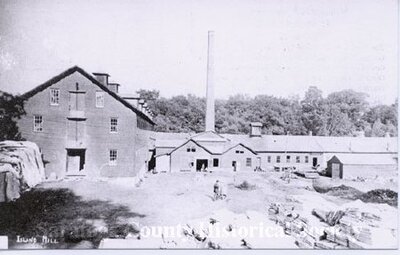 The Island Mill in Ballston Spa

The millions of acres of woods in the general area didn’t just help lumber and logging industries. Paper mills in particular were very successful, as they took advantage of those local, natural resources. International Paper was founded in Corinth in 1898 and remained a large employer for much of the county for decades. Before it closed production in Saratoga County in 2004, the factory jobs offered economic prosperity that allowed many smaller businesses to pop up as well, like independent grocery stores, jewelers, and restaurants.

Paper mills weren’t the only kind of milling done on the water, however. Before the Civil War, when farming and agriculture was the largest industry in the county, a close second to paper milling was grain milling, like grist milling and flour milling. Milling wasn’t always run by large corporations; a lot of early grain mills were “built by farmers with a bit of extra cash, served a few local families and then disappeared without a trace” (Starr). It was a small but robust industry that was tied to communities and families of the county. 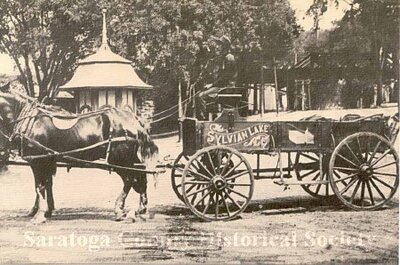 Work horses that work for an ice harvesting company

Another industry that popped up to add some revenue to farmer’s pockets during down seasons was the industry of ice. Harvesting ice was incredibly important in the time before freezers; the New York Times reported in 1901 that the ice that was being harvested off the water averaged “ten inches thick” (New York Times). This shows just how much the environment can impact industry; a hundred and twenty years later, the thought of ice that thick in December seems impossible.
While ice was harvested during the winter, it was kept in storehouses packed with sawdust year round. The insulation and accumulation of ice kept the storehouses cold enough that ice could be stored all throughout the summer. While ice harvesting and distribution for iceboxes was a full-time, year-round job for some, for most it labor job during the winter, when agricultural opportunities were low. After World War II, refrigerators became the norm, and so the need for the industry petered out, although some of the storehouses still stand today, unused. 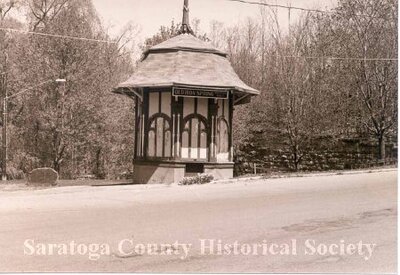 Old Iron Spring, a mineral spring found in Ballston Spa, right across from the Brookside Museum

In addition to industries based on natural resources, Saratoga County’s natural resources sparked national and international tourism from the early 1800s. The mineral springs of Ballston Spa and Saratoga Springs sparked early visits, and to keep people entertained, tourist attractions popped up. In the late 18th century, the most important town in Saratoga County for the tourism industry was Ballston Spa, which contained a hotel with backgammon and billiards parlors, which were more compared with fancy European hotels. Saratoga Springs, home to America’s first temperance society in 1809, had a much tamer reputation, but still overtook its neighbor with more mineral springs that it incorporated as a town and separated from Saratoga in 1819. When a man named John Clarke bought a section of Saratoga Springs in 1823, he called upon his own background as a proprietor of an early soda fountain in New York City, and he decided that he could take advantage of commercial appeal of Saratoga’s mineral springs, marking the first instance of the industrialization of Saratoga’s water. In less than a decade, Clarke would have his employees shipping 1,200 bottles of Saratoga water per day and was selling it based upon its supposed therapeutic quality. Like the racetrack, the industrialization and commercialization of the water in Saratoga Springs allowed it to overtake Ballston Spa as the town of culture significance in Saratoga County among more than just the water connoisseurs who already held Saratoga Springs in high regards due to trips taken by Phillip Schuyler, George Washington, and others (Nicholson). 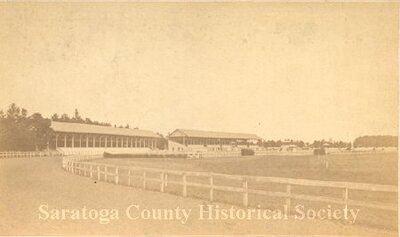 An older image of the racetrack

Water was not the only industry. In 1863, future congressman John Morrissey decided to hold a series of horse races in Saratoga Springs. After the 1863 meet proved profitable, Morrissey and his associate, wealthy businessman Cornelius Vanderbilt, began financing the construction of a racetrack in Saratoga. The racetrack opened a year later. The industrial aspect of the racetrack fueled a tourism boom in Saratoga, and the flood of tourists that the racetrack brought in established the city’s reputation as a resort community. Because horse racing is a seasonal activity, the resorts and hotels attracted employees looking for seasonal work in the early 20th century, notably African Americans moving north. As a 1915 newspaper resort notes, a number of Black waiters working in Saratoga hotels would travel to Lake George or Lake Champlain in the offseason for other employment opportunities (Svenson). This description of seasonal workers in early 20th century Saratoga Springs illustrates the connection between industry and the people of historical Saratoga County because of the class and racial concerns that brought people both in and out of the county. The switch from Ballston Spa to Saratoga Springs as Saratoga County’s premiere tourist attraction was also due to the introduction of a railroad in the 1850s, causing a tourism boom that transformed Saratoga Springs from the rustic counterpart to Ballston Spa’s fancy European-style hotels to a resort town that attracted tourists (Chambers). 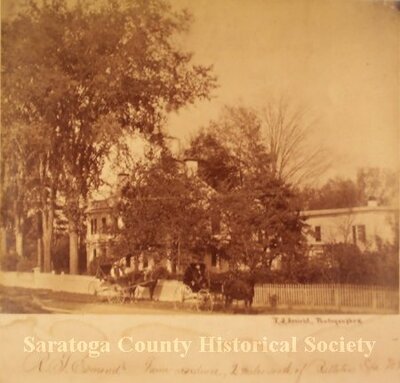 Farming and agriculture are related to industries such as water and mills, but less scholarship seems to exist on the subject of agriculture in historical Saratoga County. Upstate New York more generally is cited as being historically important to the cheese and dairy industry, as industrial innovation in the 1880s led to Upstate New York being a manufacturing site for the dairy industry before the dairy products were shipped to New York City (Marx). Specifically in Saratoga County, family farms existed in communities throughout the county. One usage for this agriculture can be seen through the spice factory owned by Joshua Anthony in the 19th century in Halfmoon. This spice factory sat at what is today known as “Farm to Market Road” in Halfmoon, honoring the legacy of agriculture in the town today.

Today, Saratoga County is home to several employers that did not exist in earlier centuries, but represent a continuation of importance for industry in Saratoga County’s history.

The Saratoga County Industrial Development Agency website lists Globalfoundries, a semiconductor company which broke ground on a semi conductorfactory in 2009 and is now headquartered in Malta, as the county’s largest employer; like the early mills, this Fab 8 factory relies on an abundant water supply.

Large employers like GlobalFoundries and QUAD/Graphics, which employ thousands, show the continued  importance of the manufacturing industry to the County economy to the present. But they are not alone.  Agriculture remains an important County industry.

And other industries are now significant employers.  Public school districts and private colleges like Skidmore represent the importance of education to workers as well as students. StateFarm 's offices (Malta), Target's distribution center (Wilton), and the locally-founded and headquartered Stewart’s Ice Cream Company (throughout the County) shows  industry growing and evolving.

1898 -- International Paper is is incorporated in Corinth (January 31)

2009 -- Global Foundries breaks ground for its Fab 8 chip factory in Malta and in
2021 -- announces it will move its headquarters to Malta, NY.