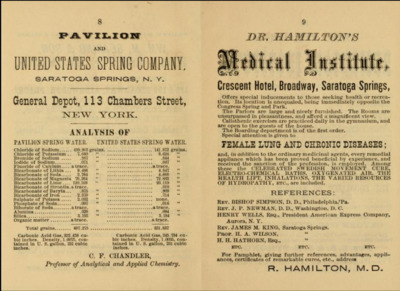 The list of mineral springs (left) and advertisement for a doctor (right) show health and welness from springs and doctors went hand-in-hand in nineteenth century Saratoga.

Since the 1600s, Saratoga County has attracted residents and travelers seeking to improve their health and wellness through the use of formal medical treatment by doctors, dentists and midwives, therapeutic treatments and relaxation in mineral springs, and recreational use of the forests, rivers, lakes and mountains to restore their spirits and build strength.  This opening from R.F. Dearborn's guidebook to Saratoga Springs in 1871 shows how the two forms of treatment have operated side by side -- whether providing all the curative and restorative energy desired or not!  Two essays explore health and wellness as experienced in the county, particularly in the last 200 years. A third essay compares and contrasts two major pandemics in the last century: the Spanish Flu of 1918 and the current COVID-19 pandemic.

Timeline of Health and Wellness in Saratoga County

1833: Railway is extended to Saratoga Springs.

1848: Railway is linked to Hudson River.

1869: Gideon Putnam’s hotel is expanded and reopened as the Grand Union Hotel.

1908: Springs of Saratoga are nearly depleted.

1909: New York passes a bill that makes the springs of Saratoga a state reservation.

1914: Homestead was opened in Barkersville, East Galway, and treated patients for tuberculosis until 1960.

1844: Dr. R.L. Allen published a book in 1844 called “A Historical, Chemical, and Therapeutical Analysis of the Principle Mineral Waters of Saratoga Springs”.

1858: Dr. Samuel Pearsall, a native of Wilton, returns to Saratoga Springs after attending lectures at the Homeopathic Medical College of Philadelphia for 2 years to practice medicine.

1918: Dr. Ralph B. Post left to serve as a physician in the European Theater in World War I.

1957: Dr. Ralph Isabella, president of the Schenectady County Medical Society, urged the public to overwhelm the program of mass inoculation before "essential priority groups" in the community had been inoculated.

← Travel and Transportation
Health and Medicine →
Health and Wellness