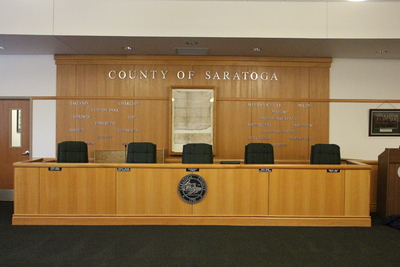 Board of Supervisors Meeting Room

When was the County created and how has it changed/grown?

Who is in charge?  (Any changes over the years?)

What does the government do at county level?  (Changes?)

Where is county government located?

What are politics and elections like in Saratoga County? 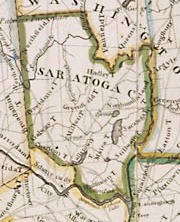 The New York State Legislature, in recognition of increasing settlement by citizens of the new state and nation, enacted a law on February 7, 1791 dividing Albany County into several new districts, including  Saratoga County.  Sources: Law, February 7, 1791; Greenleaf, Laws of the State of NY 1792

The County's government formed over the next three years, with appointments of judges, and a sheriff in 1791 and Commissioners in 1794.  The first leaders were (as many have been since) a handful of leading men in a population of around 17,000 European residents.

New York Governor Clinton appointed the County's first four judges, one from each of the four 'mother towns', who organized the first court of Common Pleas and Court of Sessions in May  1791 at the home of Samuel Clark in Stillwater (now Malta). A few weeks later, on the last Tuesday of the month, the first meeting of the Board of Supervisors convened at "the dwelling house of William Mead, of Stillwater, Innkeeper." (Appendix, 21;Pratt, 2015).

By 1792, there were seven Supervisors, and the first County elector participated in national elections (he voted for George Washington). (1900 Proceedings, Appendix 5). 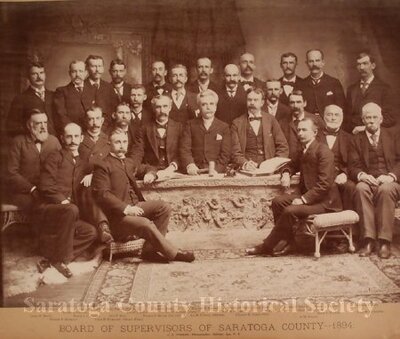 RUNNING A COUNTY  ALL IN A YEAR'S WORK

The County Government has an executive and legislative branch, the Board of Supervisor;  a judicial branch, the County Court, and an elected sheriff, the 'primary law enforcement executive of the county'. (https://saratogacountysheriff.org/).  Originally run by a handful, today's County Government, with 1400 employees, is the county's fifth largest employer. (Saratoga EDC)

The Saratoga County Board of Supervisors, whose members are elected by their towns, has presideded over Saratoga County with executive and legislative authority for over 200 years.  Each municipality sends at least one supervisor to the council. Since the 1960s,  redistricting based on one person-one vote principle has meant that larger communities, Saratoga Springs and Clifton Park, elect two.  So from four supervisors in four towns in 1791, their number has grown to 23 in 2021.

At first, the Supervisors met yearly, holding their annual meeting on the first Tuesday in October; in 1827, the date was changed to the first Monday after the general election (Appendix 28). In 1900, it met once a year -- for 23 days. The 110th "annual session" extended from November 12 to December 14 (Supervisors 100).  Today the full Board meets monthly, as do its principal committees.

What does the Board do?  Although towns govern their home communities, the Supervisors have responsibility for coordination and policy in areas that concern the district. (roads, health, education, taxes, public works, development, planning, conservation/environment, social services...)

The water you drink, gas you pump, trails you hike, elections you vote in, home additions you build, are all regulated by county government.

County departments include a Water Authority, Animal Shelter, Office for teh Aging, Office of Emergency Services, Planning, Public Health, public Works (think paving county roads and sending snow plows).  And my favorite, weights and measures, a holdover from medieval municipal practice to make sure that scales used in the stores you shop in are propery calibrated, that packages contain the amount of stuff they advertise and that gasoline being you pump is what it says it is.

Over the centuries, most Supervisors have been men.  The first four, in 1791, included two descendants of the Dutch settlers -- a Schuyler and Rosenkrans (from Saratoga and Halfmoon), and two Palmers (from Ballston and Stillwater) (Appendix, 21) By 1828, twenty towns were sending representatives.   A photograph at the Brookside Museum showing the 1904? Board of Supervisors xxxxx.  In 2021, the Supervisors from xx, nxx, and xx are women.

The County Clerk is the official records keeper of the County, and has been since 1791.  The Office has millions of documents -- including census records to 1855, court records, land records, mortgages, deeds and property maps -- many of them digitized.

[Eventually info will be here: https://history.nycourts.gov/county-legal-history/]

Saratoga SPrings:  last city in the state to be run  as it is (charter reform)

POLITICS:  More than one side to any story

The territory that makes up most of Saratoga County has seen plenty of conflict since the mid-eighteenth century.  French and Indian allies attached British settlers from the Hudson River to Ballston to Corinth, killing and being killed in return.  During the war for independence from Great Britain,  the revolutionaries (early Brexiteers) made it uncomfortable for loyalists (remainers).  The Jessup brothers, including namesake  settlers of Jessup's Landing (Corinth) often chose flight to Canada rather than staying put.

While many think that the United States always had a two party system, nineteenth-century Saratoga saw the rise and fall of many early political parties, including..... 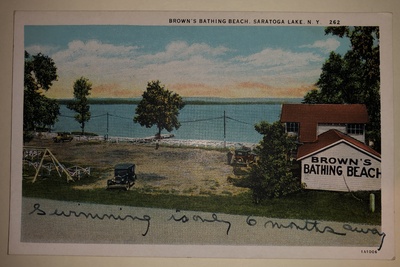 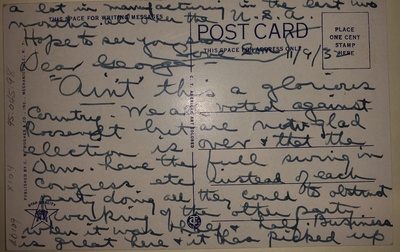 In the 20th century, Republicans and Democrats have been elected to local, state and national office with support of Saratogians on both sides of the aisle.  And welcomed an end to stalemates which kept anything from happening.  In this postcard to "George" written in November 1932, after Franklin D. Roosevelt was first elected present, the writer rejoices:

We all voted against Roosevelt but are now glad election is over & that the Dem. have the full swing in Congress etc. instead of each party doing all they could to obstruct working of the other party when it was half + half. Business is great here + it has picked up a lot in manufacturing in the last two months. All over the USA.

Today, the County's Bipartisan board of elections oversees...

Beyond electoral politics, the County has hosted (and sometimes welcomed) people and organizations advocating for social and economic reform. Progressive actions include several individuals reputed to have used their houses or taverns as stations on the Underground Railroad by which enslaved African-Americans moved to freedom (Map, 134, 242, 284)and the Quakers of Quaker's Springs  hosting a speech by abolitionist Frederick Douglass hosted in 1849 (Map, 332).

But the County has not always been a place of safety for all comers.  Free Black musician Solomon Northup was famously kidnapped and his tale, Twelve Years A Slave (18xx) has become a cautionary tale.  Today, Saratogians in organizations including  MLK Saratoga help us rethink the past with a "OurStory Treasure Hunt,"  mobilize in the present with the Immigration Coalition for "All Are Welcome Here," and advocate for future police reform and justice for Darryl Mount, among other items.

1796 - First county Courthouse and Jail (burned down), in Milton

***. First woman elected to Saratoga County Board of Supervisors