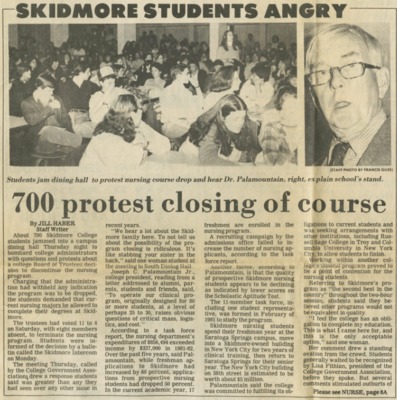 The practice of medicine saw much change during the 1970s, most notably, a large uptick in the admittance of women to medical schools, which subsequently caused lower enrollment rates in nursing programs nationwide. Skidmore College was no exception to this trend. This low enrollment was one of the main drivers that sparked discussion to close the program in 1984. Many alumni were both hurt and confused over the sudden closure of the program that they were so passionate about, creating tensions between them and the college. The decision was obviously a very divisive one; students and alumni organized protests which were featured in the local papers and alumni petitioned to the board of trustees. 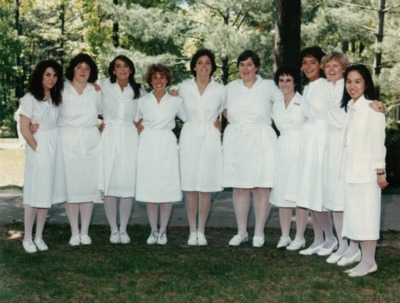 The class of 1985 were the last students to earn their degree in nursing at Skidmore College. The closure of the program ended a sixty two year long tradition of educating future leaders of the nursing community, and one of the most prestigious and highly regarded programs in the country. The closing was even written about in the New York Times. While this decision was and remains to be a sad moment for many of the school’s alumni, nursing continues to thrive at Skidmore to this day. The project was created in order to celebrate the program and show that all the original department is no longer in existence, Skidmore still prides itself on its history of nursing and will continue to pursue this field of study.

Even though there is no formal nursing or medical program at Skidmore currently, many young people are still entering the field post graduate. The school has established the Health Professions Advisory Committee (HPAC) which aims to advise students interested in health professions on their course work, application process and careers in the medical field. HPAC also hosts alumni working in the medical field so that they may come and speak to current students, as well as provides a network for those students looking for internships, clinical experience, etc.

Started in 2009 by Terry Thomas Fulmer (Nursing Program, Class of 1976), the Skidmore College and New York University articulation agreement has created a streamlined path for undergraduate students to enter nursing school post-grad. In fifteen months, students have the opportunity to earn their bachelor’s of science in nursing and become a registered nurse, while receiving an education from one of the best programs in the country.