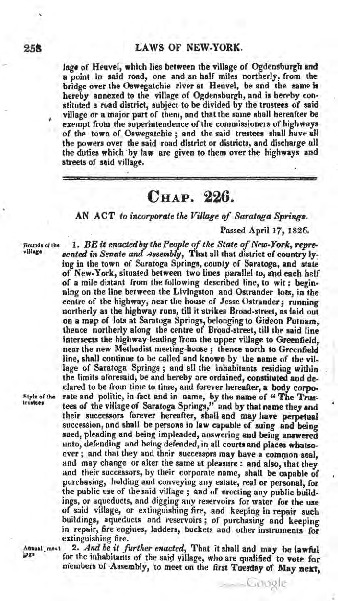 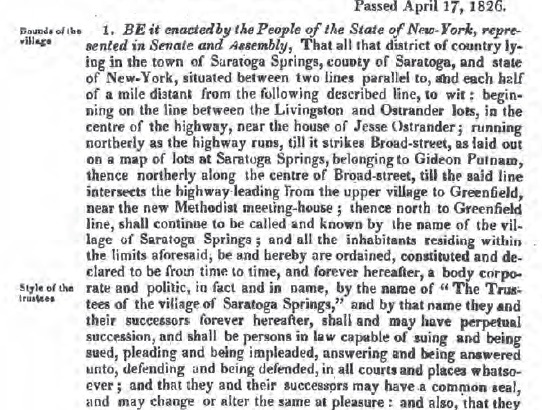 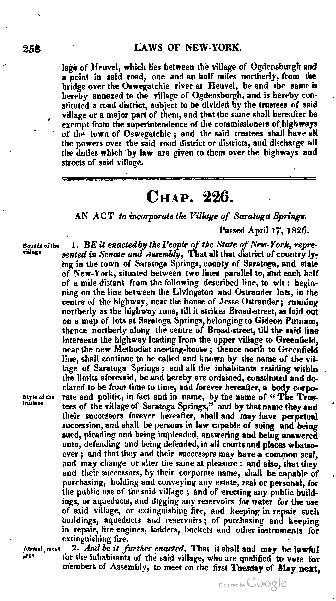 Laws of the State of New-York passed at the forty-ninth session of the Legislature, begun and held at the city of Albany, the third day of January 1826.

Printed by E. Croswell, Printer to the state

AN ACT to incorporate the Village of Saratoga SpringB.
Passed April 17, 1826.
1. BE it enacted by the People of the State of New-York, represented in Senate and Assembly, That all that district of country Jying in the town of Saratoga Springs, county of Saratoga, and stateof New-York, situated between two lines parallel to, and each half of a mile distant from the following described line, to wit : beginning on the line between the Livingston and Ostrander Jots, in the
centre of the highway, near the house of Jesse Ostrander; running northerly as the highway runs, till it strikes Broad-street, as laid out on a map of lots at Saratoga Springs, belonging to Gideon Putnam, thence northerly along the centre of Broad-street, till the said line intersects the highway leatling from the upper village to Greenfield,
near the new Methodist meeting-house ; thence north to Greenfield line, shall continue to be called and known by the name of the village of Saratoga Springs ; and all the inhabitants residing within the limits aforesaid; be and hereby are ordained, constituted and declared to be from time to time, and forever hereafter, a body corporate and politic, in fact and in name, by the name of "The Trustees of the village of Saratoga Springs," and by that name they and their successors forever hereafter, shall and may have perpetual succession, and shall be persons in law capable of suing and being sued, pleading and being impleaded, answering and being answered unto, defending and being defended, in all courts and placea whatsoever; and that they and their succesors may have .a common seal,
and may change or alter the sarne at pleasure : and also, that they and their successors, by their corporate name, shall be capable of purchasing, holding and conveying any estate, real or personal, for the public use of the said village ; and or erecting any public buildings, or aqueducts, and digging any reservoirs for water for the use of said village, or extinguishing firl', and keeping in repair such
buildings, aqueducts and reservoirs; of purchasing and keeping in repair, fire ·engines, ladders, buckets and other instruments for extinguishing fire.