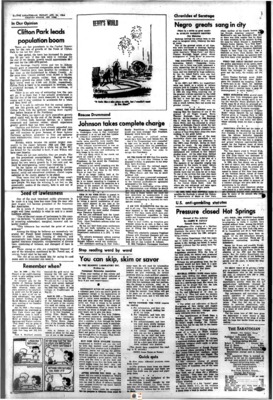 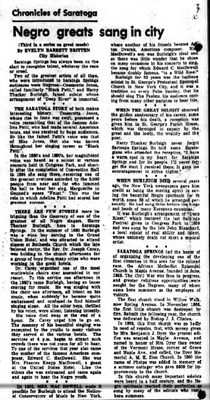 Saratoga Springs has always been on the
alert to recognize talent, whatever the race
or creed.
Two of the greatest artists of all time,
who wore introduced to Saratoga Springs
audiences were Negroes—Caeserette Jones,
called familiarly "Black Patti," and Harry
Thacker Burleigh, famed soloist whose
arrangement of "Deep River" is immortal.
o e •
THE SARATOGA STORY of both makes
interesting history. Cesaeretta Jones,
whose rise to fame was swift, possessed a
voice resembling that of the famous Adeline
Patti, who had made several American
tours, and was received by huge audiences.
So like the famed Patti's voice was that
of Miss Jones, that she was known
throughout her singing career as "Black
Patti".
In the 1880s and lttO's, her magnificent
voice was heard as a soloist at various
concerts held in Congress Park, and shortly
after the completion of Convention Hall
in 1894 she sang there, -receiving one of
the greatest ovations accorded by the 5,000
people from near and far who jammed
the hall to hear her sing, Marguerite in
Gounod's opera "Faust." This was the
role in which Adeline Patti had scored her
greatest success.
e e •
THERE ARE FEW STORIES more intriguing
than the discovery of one of the
greatest of all Negro lingers, Harry
Thacker Burleigh, here in Saratoga
Springs. In the summer of 1880 Burleigh
was a wine boy serving in the Grand
Union Hotel, and was attracted to attend
classes at Bethesda Church which the late
beloved rector, the Rev. Dr. Joseph Carey,
was holding in the church afternoons for
a group of boys from many cities who were
working in the great hotels.
Dr. Carey .organized one of the most
worthwhile choirs ever assembled in our
resort. To this service one afternoon in
the 1880's came Burleigh, having an inner
craving for music. He was singing with
the choir one afternoon, all intent on his
music, when suddenly he became quite
embarrassed and confused to find himself
singing alone. All the other boys, thrilled
by his voice, were silent, listening intently.
His voice died away at the end of a
hymn. Dr. Carey urged him to go on.
The memory of his beautiful singing was
recounted by the youths to many visitors
they served at the various hotels. The
services at 4 p.m. began to attract such
crowds there was not room for all to hear.
To one of the services that year also came
the mother of the famous American composer,
Edward C. MacDowell. She was
Mrs. Frances Knapp MacDowell, a guest
at the United States Hotel. Like the
others she was entranced and came again
and again to hear the Negro youth.
' at • • m^__^^__^^__
IN 1892, MBS. MAC DOWELL made it
possible for Burleigh to attend the National
Conservatory of Music in New York,
where another of his friends became
Anton Dvorak, American composer.
MacDowell's son was Burleigh's ideal
so there was little wonder that he chose
on many occasions in his concerts to sing,
the song for which Edward C. MacDowell
became doubly famous, "to a Wild Rose."
Burleigh for 52 years was the baritone
soloist in St. George's Protestant Episcopal
Church in New York City, and it was a
tradition on every Palm Sunday, that ho
should sing The Psalms, his audience coming
from many other parishes to hear this.
***
WHEN THE GREAT SOLOIST observed
the golden anniversary of his career, some
years before his death, a reception was
given him in St. George's Parish House,
which was thronged to capacy by the
great and the lowly, the wealthy and thq
poor.
Harry Thacker Burleigh never forgot
Sartaoga Springs. He told some Saratogians
who attended the reception, "I have
a warm spot in my heart for Saratoga
Springs and for its people. I'll never ferj •
get the start I received there. It gave me
encouragement to strive higher."
• • •
WHEN BURLEIGH DIED several years
ago, the New York newspapers gave him
credit as being the moving spirit in saving
the beautiful Negro spirituals for th
world, some 50 of which he arranged personally.
He had sung them before the, kings
and heads of many European countries.
It was Burleigh's arrangement of "Deep
River," which featured the last Saratoga
Festival given in Congress Park in 1959
and was sung by the late John Blanchard,
a local soloist of real ability and talent,
whose untimely death cut short a musical
artist.

This article contains many unproven, unsubstantiated assertions about Burleigh's time in Saratoga Springs starting in 1880 and his discovery by a New York City socialite. While the story may be true, the documentary record has not yet provided evidence to confirm it.