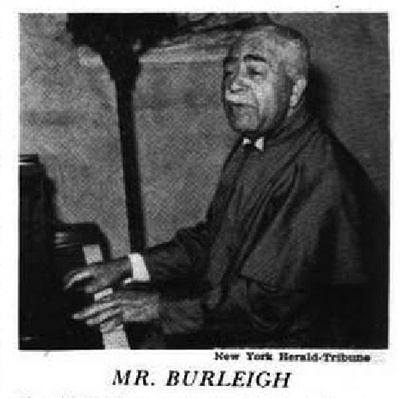 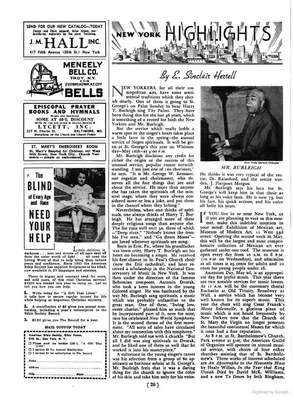 NEW YORKERS, !or all their cosmopolitan airs, have some sentimental traditions which they cherish dearly. One or them is going to St. George's on Palm Sunday to hear Harry T. Burleigh sing Tltt: Palms. They have been doing this for the last 46 years, which is something of a record (or both the New Yorkers and Mr. Burleigh. But the sen•ice which really holds a warm spot in the singer's heart takes place a liulc later in the spring-the annual service of Negro spirituals. lt wiill be given at St. George's this year on Whitsunday-May uth-at 4:00 P.M. • Mr. Burleigh disclaims any credit !or either the origin or the success of this unusual service, popular rumor notwith·standing. I am just one or uo choristers," he says. "It is Mr. George W. Kemmer. our organist and choirmaster, who deserves all the fine things that are said about the service. He more than anyone else has taken the spirituals off the minstrel stage, where they were always considered more or less a joke, and put them in the chancel where they belong." Nevenheless, when one thinks or spiri·tuals, one alwaya thinks of Harry T. Burleigh. He has arranged more of these deeply religios songs than anyone else. The list runs well over so, tltrce or which -"Deep river." "Nobody knows the trouble I've seen," and "Go down Moses"-are loved wherever spirituals arc sung. Born in Erie, Pa., where his grandfather was town crier. Hany T. Burleigh act his heart on becoming a singer. He received his lint chance in St. Paul's Church choir (now the Erie Cathedral), and later re ceived a scholarship in the National Conservatory of Music in New York. It was then under the direction of the famous Bohemian composer, Antonio Dvorak, who took a keen interest in the young Colored singer. He was fascinated by the way Mr. Burleigh sang spirituals, a music which was probably unfamiliar to the great man. One of these, "Swing low, sweet chariot," pleased him so much that he incorporated part or it, note for note, into his celebrated New World. Symphon-,. It is the second theme of the first move·ment. "All sorts of tales have cirrulated about my connection with this symphony," Mr. Burleigh told me with a chuckle. "But all I did was sing spirituals to Dvorak, and he liked one of them so well that he worked it into his masterpiece." A milestone in the young singer's's career was his selection from a group or 60 applicats as baritone soloist at St. George's. Mr. Burleigh feels that it was a daring thing for the church to ignore the color of his skin and take him only for his voice.
He thinks:s it was very typical of the rector, Dr. Ramsford, and the senior warden, J. Pierpont Morgan. Mr. Burleigh says his love for St. George's will keep him in that choir as long as his.voice lasts. He is now 73 but his face, his qu1ck actions, and his voice aII belie his years.