"Aid for our Seniors" 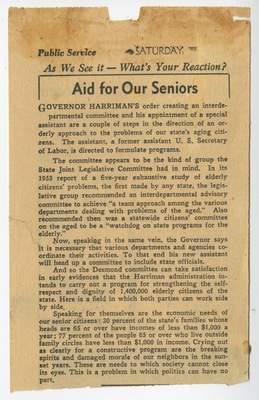 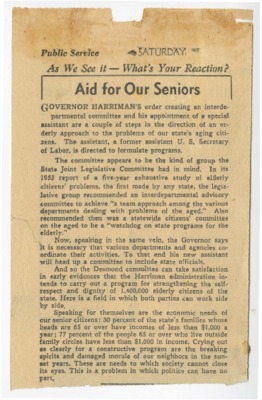 "Aid for our Seniors"

On the editorial page of the March 19, 1955 Saratogian

I Aid for Our Seniors I \
GOVERNOR HARRIMAN'S order creating an interdepartmental
committee and his appointment of a special
assistant are a couple of steps in the direction of an orderly
approach to the problems of our state's aging citizens.
The assistant, a former assistant U. S. Secretary
of Labor, is directed to formulate programs.
The committee appears to be the kind of group the
State Joint Legislative Committee had in mind. In its
1953 report of a five-year exhaustive study of elderly
citizens' problems, the first made by any state, the legislative
group recommended an interdepartmental advisory
committee to achieve "a team approach among ~he various
departments dealing with problems of the aged." Also
'-- recommended then was a statewide citizens' committee
on the aged to be a "watchdog on· state programs for the
elderly."
. Now, speakiag in the same vein, the Governor says
lt is necessary that various departments and agencies coordinate
their activities. To that end his new assistant
wilt head up a committee to include state officials.
And so the Desmond committee can take satisfaction
in early evidences that the Harriman administration intends
to carry out a program for strengthening the selfrespect
and dignity of 1,400,000 elderly citizens of the
state. Here is a field in which both parties can work side
by side,
Speaking for themselves are the economic needs of
our senior citizens: 30 percent of the state's families whose
heads are 65 or over have incomes of less than $1,000 a
year; 77 percent of the people 65 or over who live outside
family circles have less than $1,000 in income. Crying out
as clearly for a constructive program are the breaking
spirits and damaged morale of our neighbors in the sunset
years. These are needs to which society cannot close
its eyes. This is a problem in which politics can have no part.

An editorial from the Saratogian under "Public Service: As we see it -- what's your reaction? " that describes a new interdepartmental committee and special assistant created to address the issue of aging in New York State by Governor Harriman.

Adult and Senior Center of Saratoga