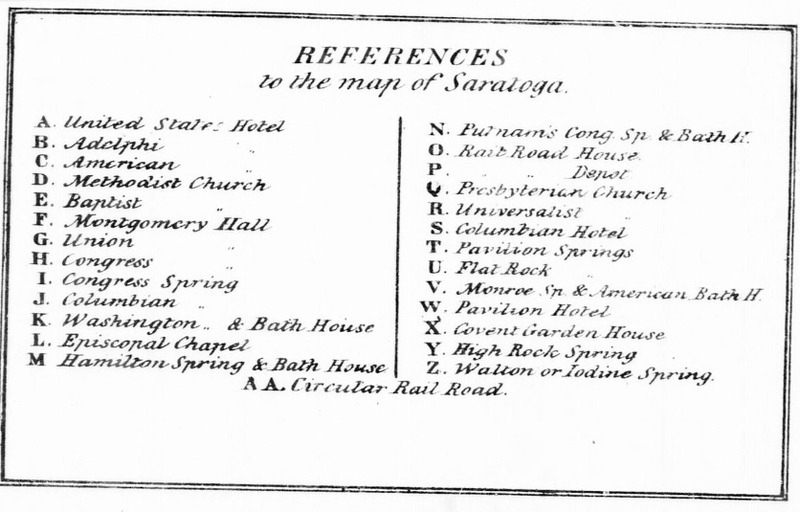 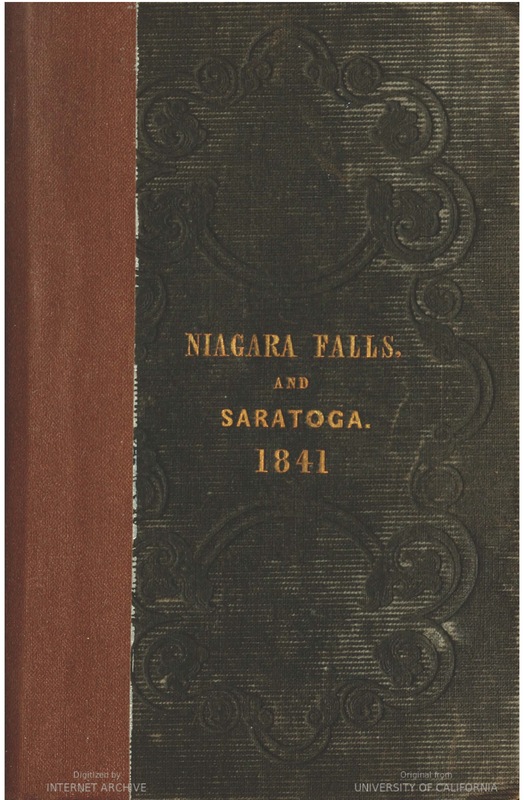 This map depicts the downtown area of Saratoga Springs as it was in 1841 as the area was becoming a tourist destination. Streets with original street names are included, and one can see that the city plan has changed since 1841. On the bottom of the map there is a list of references that correspond with points on the map that act as a guide to travelers that includes springs, hotels, and other points of interest.

The map lithography is by Hall & Mooney.

The train pulls into the station. Passengers eagerly await the opportunity to take the restorative waters they have heard so much about. Which hotel should they select? How should they go about drinking the waters? With Samuel De Veaux’s The Traveller's own book to Saratoga Springs, Niagara Falls, and Canada in hand, a traveler to the Saratoga Springs of 1841 would have these answers, and would be prepared to partake in what the village had to offer. Also describing Niagara Falls and Canada, half of the book is devoted to the springs and hotels in Saratoga Springs.

The map shows the village’s downtown area.[1] While it looks like a simple black and white map at first glance, it gives us valuable information on how Saratoga Springs was developing in this period. The development of Broadway as the main street was no accident; it connects Walton and High Rock Spring [Letters Z and Y] at the top of the map with Washington Spring [Letter K] at the bottom, and passes many other mineral springs in between. Hotels, bath houses, and the railroad depot were built along Broadway to be in close proximity to the mineral springs. Using the Reference list at the bottom of the map as a guide [Detail 1], the user could explore Saratoga Springs, from point A [The United States Hotel] to point Z [Walton or Iodine Spring].

Published in Buffalo by Faxon and Reed in 1841, De Veaux's book helped growing numbers of tourists, both in Saratoga Springs and across the nation, discover and explore.[2]

The map highlights how the railroad, which opened in 1831, made visiting Saratoga Springs much easier.[3] Visitors arriving by train were deposited just a block from Broadway, the center of town, near the mineral springs and grand hotels. [Detail 2]
Upon arriving by train, visitors would only have a short journey to any of the five hotels on the map. After settling into their accommodations, guests would likely be eager to sample water from one of the famous springs.

According to De Veaux, the visitor’s first stop upon arriving in town should be Congress Spring.[4] With this trusty map in hand, a visitor could navigate from their lodging, perhaps the United States Hotel [Letter A] on the corner of Broadway and State Street, south along Broadway to Congress Street, to find the famed Congress Spring [Letter I], whose water was shipped across the country and around the world, or head north to High Rock Spring [Letter Y] [5]

Visitors would often stay in Saratoga Springs for several months at a time, so they would likely need a place to worship on Sundays. De Veaux’s map could help with that—it shows the location of five different churches [Letters D, E, L, Q, and R]. After church, visitors might visit one of the numerous springs and bathhouses the map could direct them to. With De Veaux’s book in hand, a visitor to Saratoga Springs would be well equipped to enjoy the waters and other attractions in the village.

A color scan is available from Hathitrust Digital Library.